In 1961, Mrs. Margaret Acheson Stuart moved her office into the Art Club of St. Petersburg, built in 1916, and began planning the first art museum in the city.  In 1962, Mrs. Anita Kenerson formed a guild to support Mrs. Stuart’s vision.  Named in her honor, The Margaret Acheson Stuart Society helped the Museum of Fine Arts, St. Petersburg become a reality and it opened its doors in 1965.

The mission of The Stuart Society is to: promote the welfare of the Museum of Fine Arts, St. Petersburg; stimulate public interest and participation in Museum activities; increase the Museum’s general membership; and to maintain a close acquaintance with the activities of the Museum.  The Society fulfills its purpose in many ways today, including sponsoring free admission to the annual Holiday Open House.  The Smartly Dressed Fashion Show, one of the most highly regarded fashion shows in St. Petersburg, has been produced by The Society for 43 years.  Our highly attended Art in Bloom weekend is celebrating its 25th Anniversary this Spring.  Funds donated by The Stuart Society exceed $5 million, and have supported major exhibitions, art acquisitions, art restorations, educational programs and capital improvements.  Through our efforts and your generosity over the past 60 years, the Museum continues to thrive.

Our 60th Anniversary comes at a challenging time for our nonprofit organization due to economic and health concerns, but we are optimistic that The Stuart Society membership and all Museum supporters will help us reach our goal of $60,000 to celebrate 60 years of supporting the Museum of Fine Arts, St. Petersburg.

Our volunteer organization has enthusiastically worked alongside each Museum Director and has enjoyed a rewarding relationship with its staff since 1962. Your 60 for 60 Anniversary contribution adds to the continued success of The Stuart Society and the Museum of Fine Arts, St. Petersburg, the city’s first art museum!

Thank you for your generosity and support.  Happy Anniversary!

Give to the 60 for 60 Anniversary Appeal 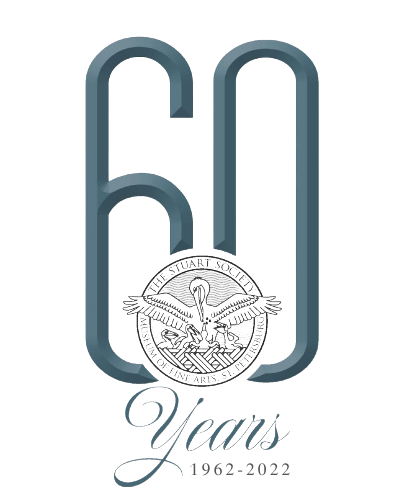